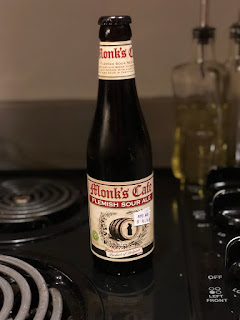 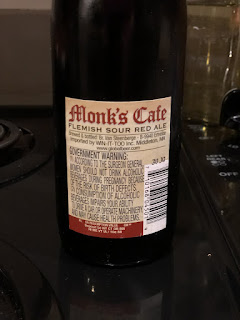 Let me start out by saying... I don't like beer. I've never liked beer. I want to start. Tonight, I'm trying Monk's Cafe Flemish Sour Ale. It was suggested by a coworker. He gave me a lavish explanation and I nodded as if this made total sense. It did in theory, but (to me) beer is beer. There is varying degrees of beer from tolerable taste to absolutely disgusting. The latter ends up down the drain.

You can watch my taste-testing video here:

Initially, the Monk's Cafe was amazing. It is in a bottle though so it didn't stay as cold as it needed to be. The first few sips were amazing, but as it became warmer, it started tasting like any other domestic beer (in my opinion).

Popular posts from this blog

May 2018 Television Cancellations and Renewals

January 02, 2019
I stopped blogging. I stopped blogging.  I stopped blogging.  I wanted to. I just couldn’t bring myself to. I couldn’t find the words to say. I couldn’t find the time. That killed me inside. I love writing. I love expressing myself in this way. Even the television shows I used to love and blog about weren’t what I wanted to express.  I was busy in the last half of 2018. I had to find myself again. I took the longest break from blogging that I have probably ever done. But that’s okay. It’s okay to focus on yourself. To stop doing things that require time and energy to be the person you want to be.  2018 brought a lot of new and ended a lot of old. When I started the year 2018, I was a different person. I was depressed. I was sick. I was in a marriage where we both were not happy. I was spending my time between WVSU, doctor’s offices, and home. It was a constant struggle. I was losing weight. I wanted to die. I didn’t want to go on and live through the rest of the year. I felt
Read more

If you've read the title of this post, you probably already have a few different answers to this question. It could be as simple as yes-or-no or as complicated as yes and no. You could have an entire speech about how it doesn't matter. You could have a speech about how it does matter and pedophilia is a real problem in the United States. Pedophilia is defined as a psychiatric disorder in which an adult or older adolescent experiences a primary or exclusive sexual attraction to prepubescent children. The keywords here are "primary" and "exclusive", but there's other key things to know about pedophilia, especially in the United States. For the condition to be diagnosed, an individual must either act on their sexual urges or experience significant distress as a result of their urges or fantasies. Without these two criteria, a person may have a pedophilic sexual orientation but not pedophilic disorder. An estimated twenty percent of American children have
Read more